When filling IT specialist jobs, it can be difficult to find excellent employees with the cosmopolitan background to solve most companies’ pressing needs. More recently, however, companies are turning to IT experts from South-Eastern Europe for an employee base.

With countries such as Romania long having developed the cultural values of South-Eastern Europe, the region has long been praised for its high educational standards and the kind and welcoming nature of its citizens. If your company is looking for IT staffing solutions, South-Eastern Europe may be the best region to draw your talent from. Here are just a few reasons why this is the case. 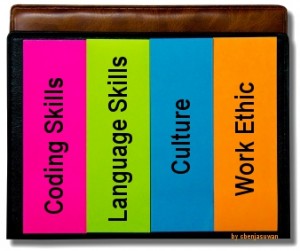 1. Coding and Mathematical Skills
South-Eastern European countries put a great accent on mathematical skills as a basic educational right for students; for example math geniuses from Romania won in average at least one gold medal and two silver medals each year at the International Mathematical Olympiad, which was first held in the year 1959 in our dear Bucharest.

In large part due to this emphasis on mathematical skills, IT specialists are excellent with coding, drawing on an educational system that pushes students to advanced mathematics at an early age. But don’t take only our word for it, Bill Robinson from the Huffington Post says so as well!

The result of having a team of IT experts with a high level of mathematical training will be a fundamental understanding of computing for your company from the ground up, and thus a holistic way of fixing problems that can start at the source of your IT needs.

2. Language Skills
Because South-Eastern Europe stands at an apex of many different cultures within a radius of only a few hundred square miles (and because the younger generation grew up with English cartoons), IT workers tend to have a solid background in the English language, but many other languages as well. For example Romanian IT specialists are familiar with a variety of languages (not just programming languages!) that are most commonly used by businesses, not just due to the close proximity to Italy, France, and Spain, but because the Romanian language is very similar to languages like Spanish, French and Italian.

3. Similarity to Western Cultures
Unlike IT staff from countries in more distant areas (like India), South-Eastern Europe and its workers tend to have overlapping borders with other centers of Western culture and thus a similarity in value systems. The professionalism of hard-working South-Eastern European IT specialists tends to rival that of most nations. Additionally, many of the South-Eastern European countries are part of the EU, so countries like Romania and Bulgaria have a common the legislative framework as the UK, Germany, France and other EU members.

4. Work Ethic
Among systems of virtues, a strong work ethic tends to rank highly among South-Eastern European nations. As you will find out, this work ethic will largely determine the quality of the work and coding provided by IT experts drawn from the region. In addition, the IT workforce in the region is much more stable; specialists don’t change companies or jobs as often as in other non-European countries where the IT personnel turnover is quite high.

With coding, language, and cultural skills that will make any employer’s company run smoothly, South-Eastern Europe is making its mark in the computing world as the 21st Century pushes onward. So, if IT recruitment is high on your list of priorities this year, let us fulfill your IT staffing needs and you will find that the experts of South-Eastern Europe are exactly what you need to make your company reach its full potential.