US, August 8th, 2017: Google fires a computer engineer for suggesting that women are less suited to certain roles in tech and leadership than men. He said: “The distribution of preferences and abilities of men and women differ in part due to biological causes, and these differences may explain why we don’t see equal representation of women in tech and leadership.” 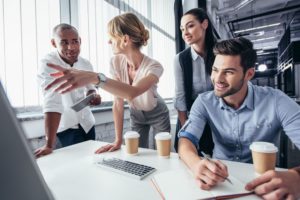 Spain, August 17th, 2017: A police officer shoots four terrorists in Cambrils, limiting the largest bombing after the one in Barcelona that same day. The hero police officer is a woman. (https://www.thesun.co.uk/news/4270716/barcelona-attack-terrorist-shot-fake-suicide-vest-video)

Romania, May 2015: The press reports on the remarkable performances of a Romanian IT specialist, Raluca Ada Popa, a young woman from Sibiu, with a PhD from MIT and employed in Silicon Valley. (http://stireazilei.com/o-romanca-a-impresionat-sua-este-considerata-una-dintre-cele-mai-inteligente-femei-din-lume/)

Romania, October 28th, 2011: Tarom, the national airline of Romania, announces that 14 of the company’s pilots are women, of which 3 are captains.

“The need for order and the denial of chaos – the need for control – can exclude what is little and different.”

We sincerely say that, until these publicized cases, we never considered any possible gender determinism in the professions. It doesn’t bother us discussing such a subject, although we tend to believe that there is no determinism in the professions and competencies on criteria that we consider to be of a natural nature: race, ethnicity, gender and sexual orientation. Not to mention the hierarchy is one thing; differentiation is quite another.

Even though, at this point, statistics show that in IT specialist jobs, for example, most of the employees are men, we do not know if this necessarily means that women do not have the slightest inclination for programming and that we only discuss “exceptions.” So all men have a natural inclination for programming? If not, what is the proportion/percentage? We do not know what is determined by gender and what is actually induced by education (we simply hear that “women are good at this, and men at that.”) We do not know whether differential access to education and differences in treatment applied to men compared to women in history is reflected in such statistics.

In our organization, but also when it comes to our clients or our candidates, we try to avoid “rule–exception” or “minority–majority” approaches, preferring the “whole-part” perspective. For us, the part counts: with no parts there is no whole, and the specificity of each part constitutes the whole. The need for order and the denial of chaos – the need for control – can exclude what is little and different: we value or believe only in what is in the majority (hence we can miss the hiring of valuable people). These topics concern both companies (organizational culture) and individuals (mentality). In the end, both organizations and employees choose what suits them.

However, INDIVIDUALLY, the challenge of each of us remains to discover and accept our own identity, including our PROFESSIONAL IDENTITY.

We use cookies to offer you a better browsing experience, analyse site traffic, personalise content, and serve targeted ads. Read how we use cookies and how you can control them in our "Cookie Settings". By using our site, you consent to our use of cookies.OkCookie policy